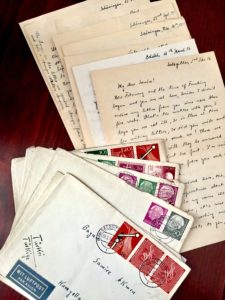 Knowing that people used to communicate with each other and express their feelings through hand-written texts made me feel somehow sad for being born in this era. In fact, with the fast technological development our world is going through, the use of electronic devices, telecommunications, internet, and social networks, many of the old institutions, materials, and instruments had been forgotten in the favor of those innovations. Lifestyles had been changed and what used to be a primordial element in life disappeared, facing the novelty of science and technology. One of the best examples illustrating this is letters: the act of correspondence via postal mail.

I had my first connections ten years ago when I found by chance letters written by my parents to each other between 1978 and 1984. We were moving to another home and I was helping my mother pack.  She asked me to organize our old albums carefully, when I looked inside them and found about 20 letters. I could not hold myself and without asking for permission I started to read them. Some of them were written in Arabic and some in French. Reading them was the first chance I had to see my parents in another profile than being just my own parents; it was the chance to get to know another side of them, the side of the lovers, students, young activists, and being the daughter and the son of their own parents. It was the first time I figured out that they have other identities and they were characters of a beautiful romance.

At that moment, my connections with letters started. I knew letters were my road towards learning in a very specific and exceptional way; for instance it was thanks to letters that I figured out that a human has different belongings, identities and takes extremely different paths. My connection to letters began with moment I knew I could be able to find a lot of hidden lives inside the old yellow papers.  Consequently, as I went through my academic life and got more interested in humanities, I thought of putting those feelings I had ten years ago while reading my parents letters into an academic article or a documentary, and I started collecting old letters from different countries in the Middle East. Knowing five languages fluently gave me the chance to access a lot of data. I collected more than 500 letters from all over the middle east, especially Tunisia, Turkey and Egypt. I started to travel in time and space and letters were my time traveling jet.

For the last few months, I started to work on my collected letters; they were already organized and categorized: I have different files for each person’s letters and I classify them according to the date (usually written on the right corner of the first pages of each letter). In this way I have several files, each file has the name of the letter’s recipient, and the letters are organized chronologically. As an example, one of the files has two white labels on it; the first one mentions the place where the letter’s receiver used to live and in this case it was “Turkey-Istanbul- Kadikoy” and the second on had the name of the receiver on it “Samira Akmen”. The first letter was written on June 16th 1955 and the last one in this file was dated on October 30th 1959. I had in my hands in this black file, more than seventy letters with encumbered with love, pain, passion, friendship, regret… and a lot of images from the past.

Of course, I also had the same questions you may be asking while reading this text, how it is possible to find these letters? Where did I find them?

I became angry and frustrated, and kept thinking that people selling these letters and throwing them away were monsters, but I knew that humans are different and what may mean the world for us could be simply meaningless for others. So I adopted another perspective and started to think that I am some kind of a prophet, I go out the morning searching for letters and on a lucky day some soul looking to me from the sky leads me to the right place to find their letters. It is as if they had something more to say: they had an incomplete story and they want me to tell it, or a humiliated one and they wanted me to honor it. It feels like they are whispering their lives to my ears through their letters.

It had been months, and I still cannot find the right answer, I still don’t find the way of telling those stories. It scares me that I am not producing something and I am not finding the way to complete my mission, but at least those letters are being respected and loved with me, and if someone somewhere in this world is reading this passage, and feels like rescuing an incomplete story, please don’t hesitate to go out some day and to look for these letters, because I am certain that plenty of us human beings did leave without finishing their journey.

You know what bothers me even more is this thought: if one day I get to leave without finishing my story myself and without completing their stories and honoring their discarded letters, will someone care about what I collected and keep them with love and care or would they be thrown away along with my personal letters and face another humiliation?

Projected Letters is a literary magazine dedicated to publishing the best new and established writing from around the world.